Thank you so much for supporting MERCAZ in the World Zionist Congress Election. We appreciate everyone who organized, made videos, shared our information and most importantly voted! The election has now officially closed and we'll post final results when they are announced later this month.
–The MERCAZ Campaign Team 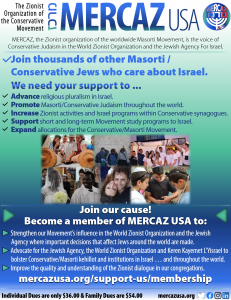 MERCAZ USA is the United States branch of MERCAZ OLAMI, the Zionist organization of the Masorti (Conservative) Movement. MERCAZ represents Masorti Judaism within the World Zionist Organization and Congress, the Jewish Agency for Israel, the American Zionist Movement, and the Jewish National Fund.

MERCAZ is the force that advocates for funding of pluralistic streams of Judaism in Israel through the World Zionist Congress, which is crucial to our movement’s growth in Israel and around the globe.

Our mission is to further the cause for true religious pluralism in Israel and strengthen the connection between, and create engagement opportunities for, the people of Israel and Jews living in the Diaspora. MERCAZ USA is proud to be the sponsor of ‘Masorti on Campus,’ supporting Masorti activities on college/university campuses, and ‘Mercaz Reads Israel,’ an online book club connecting Diaspora Jews to Israeli authors.

Click here to become a new member, renew an existing membership, or make a donation. 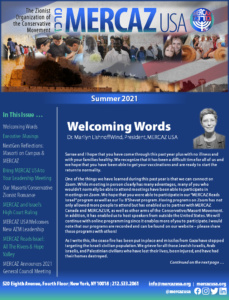 MERCAZ Reads Israel: Watch our Book Club Discussion about ‘All The Rivers’ 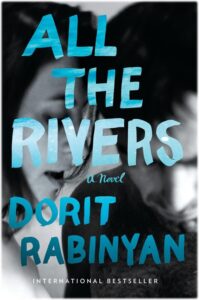 Our most recent MERCAZ READS ISRAEL book selection was All The Rivers, a novel by Dorit Rabinyan.

A controversial, award-winning story about the passionate but untenable affair between an Israeli woman and a Palestinian man. Banned from classrooms by Israel’s Ministry of Education, this remarkable novel is a bold portrayal of the strains – and delights…