Sarrae Crane, Executive Director of MERCAZ USA (fifth individual from the left), pictured with the Masorti/Conservative movement delegation to Israel the week of July 11, 2021.

The week of July 11, Rabbi Jacob Blumenthal, CEO of the United Synagogue of Conservative Judaism (USCJ) and the Rabbinical Assembly (RA), led a movement delegation that met in-person with Israel’s new President, Isaac “Bougie” Herzog, several members of his cabinet, foreign ministers, and representatives from the new majority coalition in the Knesset and other members of the Knesset.

First, the rabbis called for implementation of the so-called Kotel Deal, nearly 5 years after the initial agreement was ratified (only to be tabled 6 months later). This necessary and timely proposal expands the non-Orthodox “mixed” prayer area for both men and women near the southern part of the Western Wall. “This project is significant not just for its emphasis on religious pluralism, but also for attracting Jewish and non-Jewish visitors to one of the holiest sites in the entire country,” the delegation members said.

Second, the delegation compelled Israeli lawmakers to support and defend the rights afforded to Jews who convert or marry. Currently, the State of Israel fails to meet this sacred responsibility when its lawmakers refuse to recognize the customs – the minhagim – of the majority of the Jewish people around the world. “In this light,” the delegation members said, “Israel today is the only western country that doesn’t give freedom of religion to all Jews.”

And finally, the group raised the issue of government funding. In Israel there is no separation between State and Religion. This means that the government funds religious services, but not equally and not for all denominations. “Part of Israel’s effort to promote equality, not just equity, must include diverting government funds and other resources to non-Orthodox communities,” the delegation said.

“With these clear goals in mind, and growing support from millions of American Jews, this new government has a golden opportunity to mend the rift between Israel and world Jewry,” said USCJ and RA CEO Rabbi Jacob Blumenthal. “The solutions to the problems Israel faces this century, as well of those of Jews globally, will only develop through deliberate discourse and advocacy. We are ready and eager to play our part.”

“It was heartening to see the warm reception our movement received from members of the cabinet. We hope that they will be able to address these important issues and wish the new coalition much success” said Rabbi Stewart Vogel, RA president. 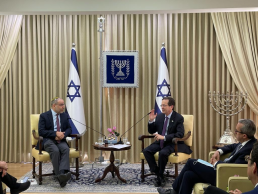 A delegation of Conservative movement leaders from the U.S. and Israel meet with President Isaac “Bougie” Herzog in the President’s residence in Israel. Seated next to Herzog is Rabbi Jacob Blumenthal, CEO of the RA and USCJ.

In addition to meeting with President Herzog at his official residence, the delegation also met with:

The delegation was led by Rabbi Blumenthal and included: 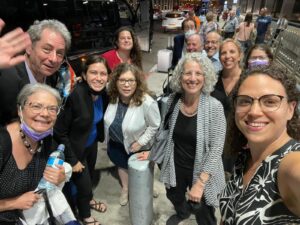