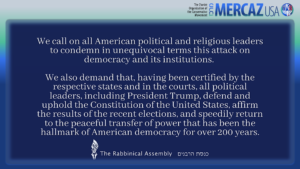 Organizations of the Conservative Movement of Judaism are appalled by the violence that took place at the United States Capitol Wednesday afternoon. We call on all American political and religious leaders to condemn in unequivocal terms this attack on democracy and its institutions. We also demand that, having been certified by the respective states and in the courts, all political leaders, including President Trump, defend and uphold the Constitution of the United States, affirm the results of the recent elections, and speedily return to the peaceful transfer of power that has been the hallmark of American democracy for over 200 years.

We are grateful to law enforcement for ejecting the rioters and re-establishing control of the Capitol, and pray for their safety and the security of Congressional leaders.

As a minority within American society, the Jewish people appreciate the democratic principles enshrined in the US Constitution. Civil liberties, and those of other minorities and marginalized groups, are guaranteed only when all leaders affirm the rule of law. The sight of a noose and Nazi symbols at the Capitol was sickening. Since the riot in Charlottesville in 2017, we have been concerned about both the danger posed by white supremacist and other extreme groups, and the weak response to those groups by some US political leaders. It is time for all political leaders to unequivocally denounce such beliefs and behaviors. As we remember each Passover, our people’s historical experience reminds us that every generation must respond to the challenge of bigotry and rise to the defense of freedom.

The basis for democracy stems from the Torah’s belief that every person is created equally in God’s image and is therefore entitled to equal representation in government and equal protection under the law. Each week we pray during our Shabbat worship to “uproot from our hearts hatred and malice, jealousy and strife. Plant love and companionship, peace and friendship, among the many people and faiths who dwell in our nation.” This prayer is more than an expression of faith. It is a call to action, and we have much work to do to heal the deep wounds and divisions which afflict the United States and society.

May the new US leaders, who are coming to power this month at every level of government, rise to the responsibility the voters have entrusted to them to bring healing and exercise responsible governance.

Read the Rabbinical Assembly’s Resolution on Voting in the 2020 US Elections here.