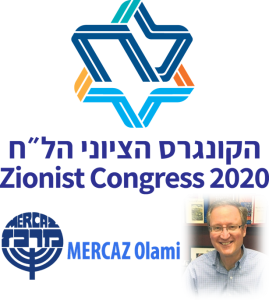 At the once-every-five years World Zionist Congress, our movement is represented by MERCAZ Olami, with 15 chapters around the world. Thanks to the campaigning during the Congress Election Campaign, we achieved 37 mandates, 18 from the USA and 19 from the rest of the world, meaning we were the fourth largest faction at the Congress.

The results of the Congress affect the next 5 years in ‘The National Institutions’, these being the World Zionist Organization, Keren Kayemet LeYisrael, Jewish Agency for Israel, and Keren Hayesod (United Israel Appeal), all crucial to the well-being of Conservative/Masorti institutions in Israel and throughout the Diaspora.

Negotiations at the Congress seek to form a governing coalition that affects the next 5 years of policy, budgeting, salaried positions and unpaid decision making positions at the National Institutions. The negotiating goal is to yield a fair coalition around Jewish unity in which all parties receive a respectful and fair amount of positions, influence, and allocation of vital resources.

Fortunately, because of our numerical strength, we were able to join with the Reform representatives, Artzenu, and rallied the center-left parties such as Blue and White, Yesh Atid, Labor and Meretz. Together, our delegates successfully lobbied neutral organizations such as Hadassah and B’nai Brith amongst others. Their willingness to join us in opposing the Haredi-inspired narrow coalition agreement proved decisive. The effort to renegotiate a coalition agreement continued down to the final hours of the Congress. A reasonable and respectful wall-to-wall coalition agreement eventually was signed.

Thanks to your votes, global Jewish unity was preserved and important benefits were gained for our movement:

Our political partnership with the Reform Movement enabled our success at the Congress. Our 105 delegates, alternates and observers worked brilliantly in lobbying organizations and leaders to support a respectful outcome for everybody.

However, rather than rest on our laurels, now we must commence to plan for the Congress of 2025. We need to strengthen our 15 chapters as well as grow new ones. We must engage our talented young adults age 35 and under as our future leaders and we need to better ‘brand’ MERCAZ and educate as to its importance for all organizations within our world-wide Movement.

To all of these ends, MERCAZ Olami has established a crucial Strategic Planning Committee, chaired by Rabbi Steve Wernick and Co-Chaired by Emily Levy-Shochat, along with a professional firm. We must remain determined to enter the 2025 Congress with a much stronger number of delegates and a greater capacity to shape the future of the Jewish People world-wide.

Our negotiating Team proved to be cohesive and outstanding:

Yizhar Hess, Rabbi Mauricio Balter and Emily Levy-Shochat, assisted ably by Nilli Glick Asaf and Tehila Reuben, and at times by me as President of MERCAZ, by Rabbi Phil Scheim as President of Masorti Olami, by Rabbi Jacob Blumenthal as CEO of the RA and the USCJ.